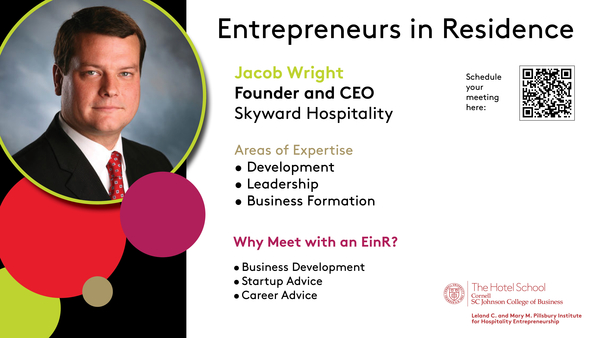 Jacob G. Wright started his first business at the age of 18 and became a serial entrepreneur who has founded, led, and sold successful businesses in the action sports, website development, real estate development, restaurant, hotel, and management industries. Wright has funded, developed, and managed more than 25 companies and more than $100 million in real estate. He has grown companies to more than $30 million in revenue and has hired and led teams as small as five to larger than 1,000 employees as a CEO and founder.

Wright focuses a significant amount of time on civic programs and charities and has been a member of several boards including the Metropolitan Development Agency, the Syracuse Chamber of Commerce, March of Dimes, the Crouse Hospital Foundation, the Pillsbury Institute for Hospitality Entrepreneurship at Cornell, and the Erie Canal Museum. In 2010, Wright was honored with Syracuse University’s 40 Under 40 Award.

Wright has stayed connected and engaged with colleges and universities over the years as a visiting lecturer in hotel development at Cornell University and an entrepreneur in residence at SHA for more than five years. He has lectured at the Entrepreneurship Bootcamp for Veterans since its inception at Cornell more than seven years ago. Wright has also been an entrepreneur in residence at Paul Smith’s College and has spent time as an EIR with an angel investment group. Wright is currently a member of the advisory board at the Pillsbury Institute for Hospitality Entrepreneurship at Cornell.

To meet with Jacob, please sign up via StartUp Tree!