Can Africa Feed the World?

Africa could be the world’s next breadbasket. But can it overcome the hurdles in its way?

Sixty percent of the world’s uncultivated, arable land lies in Africa, according to a McKinsey & Company report. In fact, the Democratic Republic of the Congo alone could feed two billion people, according to some estimates. Africa can look deceptively diminutive on conventional maps of the world due to its location on the globe, which tends to exaggerate continents closer to the poles at the expense of under-sizing those near the equator. So it can be surprising to learn that China, the United States, India, and Eastern and Western Europe could all fit inside Africa, with room to spare.

Africa’s vast potential is coupled with immense challenges. Demographic trends, lack of infrastructure, and the legacy of colonialism are major hurdles Africa has to overcome if it is ever to become the agricultural superpower it aims to be.

Edward Mabaya, MS ’98, PhD ’03, associate director of the Cornell International Institute for Food, Agriculture and Development (CIIFAD), as well as president of the African Association of Agricultural Economists, spoke about “Agribusiness in Africa’s Emerging Economies” at Sage Hall on March 9 as a guest speaker for the Emerging Markets Institute’s lunch lecture series

The sixth of ten children, Mabaya grew up on a farm in rural Zimbabwe. A graduate of the University of Zimbabwe, he came to Cornell to study agricultural economics and earned his doctorate in 2003. Agriculture and farming, he said, have always had personal significance. Throughout his academic and professional career, Mabaya has drawn on his own experience to better understand the deep cultural, economic, and social importance of agriculture in places where farming is the only way out of poverty. “When you are in a rural area in a developing country,” he said, “you realize that there simply is no other option for you out there.”

In his presentation, Mabaya warned against overgeneralizing about the entire African continent. Even though media likes to construct holistic narratives of “Africa rising” or “Africa aspiring,” in reality there are multiple narratives, and what’s true for one region or state in Africa might not be accurate for others. However, there are also similarities and common threads that are nearly ubiquitous.

Younger people are less interested in farming, and look for economic opportunities in other, more appealing industries.

One such pervasive trend concerns demographics. The age structure of most African countries invokes the classic pyramidal distribution, in which younger generations outnumber older ones. The trend is extreme in sub-Saharan Africa, where 60 percent of the total population is under the age of 25. And you can find similar figures in other regions. While a youthful population is associated with numerous benefits – younger generations are better adapted to the modern commercial and technological landscape – it also creates major challenges for agriculture and the economy as a whole.

Younger people are less interested in farming, and look for economic opportunities in other, more appealing industries. Here’s how Mabaya summarized the attitude: “You farm so that your children don’t have to farm.” This, he explained, has been true for his own family. However, since 60 percent of Africa’s population is currently employed in agriculture, it is unclear how the economy will be able to sustainably absorb displacement of labor on a large scale.

The legacy of colonialism is another pervasive theme throughout the continent. Colonial powers invested in roads and routes that made it easy to connect Africa to European markets, but did not develop infrastructure that connects regions of Africa with each other. Consequently, while France is able to profitably export bread to Senegal, delivering fresh baguettes each day, it is extremely difficult – and costly – to take goods from the Democratic Republic of Congo to the east African coast and vice versa. “The infrastructure in Africa was designed, in large part, to be extractive,” Mabaya said. “There is very minimal connection from ports to inlands between African countries.”

Nevertheless, Mabaya emphasized, there is a lot to be optimistic about. African nations are consistently ranked among the fastest growing economies of the world; the continent has some of the fastest growing cities in the world; and — as numerous states have committed to spending 10 percent of their budgets on R&D — leapfrog policies and technologies offer the promise of implementing innovations, both institutional and technological, very rapidly.

“There’s a new wave of excitement,” Mabaya concluded. “The sense of opportunity is in the air.” 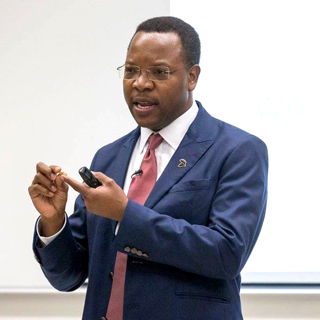 Edward Mabaya, MS ’98, PhD ’03, associate director of the Cornell International Institute for Food, Agriculture and Development (CIIFAD), as well as president of the African Association of Agricultural Economists, is involved in multiple research and outreach projects that focus on emerging markets in Africa. He helps run an annual executive training program for agribusinesses in Africa in collaboration with Market Matters, an Ithaca-based international nonprofit devoted to strengthening small and mid-sized businesses in the developing world. Now in its 17th year, Making Markets Mattermeets in Cape Town: “Every May, we get businesses from across Africa to come down and meet, discuss strategy, identify challenges, and explore business opportunities,” said Mabaya.

Mabaya has also co-authored numerous books, journal articles, and case studies focused on agricultural economics in Africa and published by Market Matters. His most recent books is From Principles to Best Practices: A “Making Markets Matter” Guide to Managing African Agribusinesses (2015). Most recently, Mabaya helped start Seeds of Development, a program that aims to “improve access to appropriate and affordable seeds for low-income smallholder farmers through business development services training for small to medium-sized local seed companies in East and Southern Africa.”