Zhu Shen’s Journey: How recovery from loss transformed her life

An unlikely journey from biotech scientist to documentary filmmaker

Those who remember reading about Zhu Shen, MBA ’98, in this magazine in 2008-09may recall a radiant, confident young woman talking about the potential for biotechnological cures for cancer.

As founder and head of BioForesight, she linked investors with biotechnology opportunities in China.

Much has happened in her life since then — some of it devastating, some life-changing.

Zhu had met her husband, Changyou Chen, when she was a young woman studying medicine at Peking Union Medical College, a top-ranked medical college in Beijing, and he was in a doctoral program in molecular biology and genetics there.

“He was considered a scientific genius by colleagues,” Zhu recalls, “and was legendary for having been the lead author on a Science magazine article and filing a patent while still in graduate school.”

Based in San Francisco, then San Diego, Zhu juggled parenthood with running BioForesight, while Changyou commuted from China, where he was a faculty member at several biomedical research institutes, working to find drugs that fight cancer.

But everything changed in 2006, when Changyou was diagnosed with cancer himself — a stage one squamous cell skin cancer growth on a finger.

Nevertheless, the couple was hopeful for a full recovery, and Changyou enjoyed four years of good health after surgery to remove the finger with the aberrant growth.

But his cancer resurfaced in 2010 in the form of a lump elsewhere that arose from metastasized cells. This time the outcome was grim.

“I had to put aside BioForesight to become my husband’s fulltime caretaker as well as be an engaged and supportive mom to Perry,” Zhu relates. “You don’t know how much strength and resilience you have until you are called upon to be strong for everyone.”

In 2012, Perry, then twelve, began to make an animated film about Changyou’s life, hoping it would inspire him to recover. Its theme was perseverance.

But when his father died in July of that year, “Perry became despondent and ready to abandon the project,” recalls Zhu. “He lost motivation, and had to learn to overcome loss, trauma, and self-doubt, on top of the growing pains of adolescence.”

Zhu also was devastated by her husband’s death. Nevertheless, “I was determined to provide whatever Perry needed to heal and grow,” she says.

The result: “My son and I started to open up to each other and gradually build a relationship based on unconditional love and trust,” says Zhu. “It wasn’t easy, but it was life-changing to both of us.”

Perry went on to complete his film, “Changyou’s Journey,” which Zhu says taught him resilience.

And Zhu helped him find mentors that believed in and inspired him — among them Dean DeBlois, director of “How to Train Your Dragon” and its sequel for DreamWorks Animation studios, and other Oscar winners and nominees from Disney and Pixar. Perry drew simple, evocative pictures of his parents and their life story that impressed DeBlois.

Zhu says that she drew on her MBA training at Johnson, particularly marketing classes with Professor Douglas Stayman, to help produce and publicize “Changyou’s Journey.”

“What I learned at Johnson,” she says, “was invaluable in developing our overall strategy, finding sponsors and donors to help finance the film, build community online and off who were interested in Perry and his animated short, and promoting and publicizing the finished film.

She also went on what she calls “an odyssey of my own.”

Introduced to daily meditation, she learned to look inward, rethink her priorities and gain a new direction, energy and purpose for her career and life.

That led her to embark on a health and fitness regimen that included exercising, losing weight and becoming more fashion-conscious. “I felt renewed, like I was in my 20s again, every day full of adventures,” says Zhu. “It was like a ‘second spring,’” she adds, evoking a well-known Chinese phrase describing someone going through positive transformation in middle age.

Perhaps most important, she succeeded in tapping into her own creativity. Inspired and aided by Perry, she has since become a filmmaker herself.

“A Journey of a Thousand Miles,” the documentary feature film Zhu has been making, is close to completion. It tells the story of how her son came to make his animated film and grew up in the process — “learning life lessons and overcoming challenges to become a fine young man, like his father, Changyou,” Zhu says. “Another parallel narrative is my own transformation along the way.”

The film evokes both the documentary-style of the movie “Boyhood” and the heartening lessons of the animated features “How to Train Your Dragon” and “Up,” says Zhu.

“I want it to inspire other families who are going through challenges like we did, to see that hope endures through the darkest times in our lives,” she says.

Most significant to Zhu: “Perry has become my best friend and mentor. He teaches me filmmaking, and I teach him business. I’m humbled by his brilliance. Over time, he told me: ‘Mom, we have quite a story to tell.’”

This June, Zhu will accompany Perry to New York City’s Carnegie Hall, where he will receive a 2018 Scholastic Art & Writing National Gold Medal Award in film and animation and a New York Life Foundation Award — among the recent awards he has garnered for “Changyou’s Journey.”

The photo of Zhu Shen in a field of flowers at the top of this story was taken by her son, Perry Chen, on Mother’s Day, May 13, 2018. Other photos courtesy of Zhu Shen. 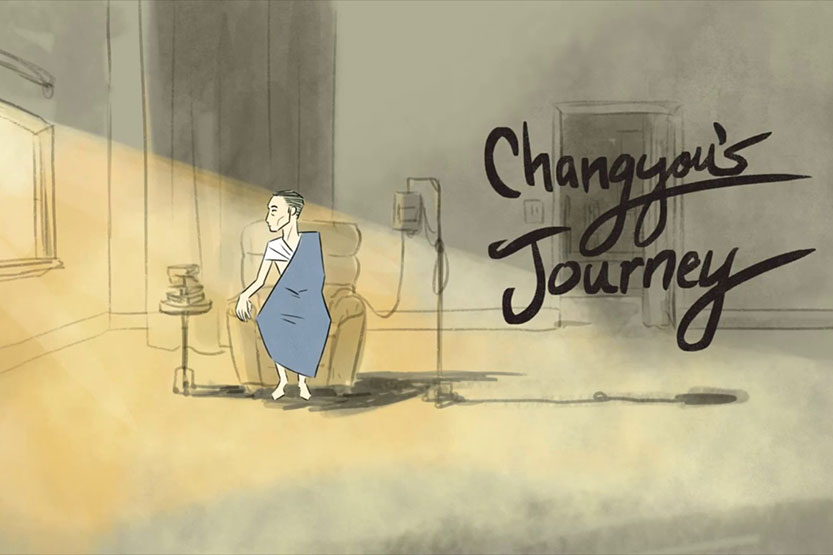 For more information about Zhu, Perry, and their films, go to www.changyousjourney.com.