Purposeful challenges us all to be movement starters

In her new book, Purposeful: Are You a Manager or a Movement Starter? Jennifer Dulski ’93, MBA ’99, issues a challenge to everyone who sees an opportunity to make their world better: You — yes, you! — have it in you to be a movement starter. It’s not just a few select social changemakers and high-powered corporate executives who can effect change.

Dulski should know. As head of groups and community at Facebook and the former president and COO of the online social change platform Change.org, the former coxswain for Cornell’s national champion women’s crew team has had a front-row seat in watching people from all backgrounds begin movements for change — large and small. “There’s a leadership thread that ties together the most successful leaders: the ability to create clear vision and rally people around common purpose,” said Dulski. 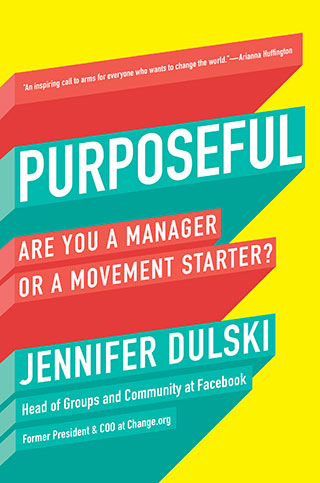 Distilling lessons from thousands of successful social changemakers, Purposeful is Dulski’s attempt at demystifying changemaking for businesspeople and social activists alike. The book follows a number of successful changemakers — including an Egyptian Muslim woman who organized a group of competitive women runners who also wear the Muslim headcover known as hijab, an entrepreneur who started a successful organic baby food company, and a woman who founded a company that produces bras for young women without sexualizing them — and explains how their ideas and companies gained momentum.

A key takeaway from these stories: Change can start small and simple. The most meaningful individual opportunities to make a difference, Dulski argues, can seem minor in the wider scheme of things. “Sometimes changing something in a school or neighborhood can also be a movement; you don’t have to change the whole world,” she said in an interview, pointing to advances in parental leave and other benefits for new mothers driven by people within big companies standing up and organizing around clear goals and demands.

“Whatever you do, action, passion, and creativity count. Now more than ever.”

In today’s world, Dulski argues, we all — businesspeople, entrepreneurs, even kids — have access to a set of tools, like petitions on Change.org, that empower us to make an impact. In writing Purposeful, Dulski believes she’s starting her own movement “to spread the idea that we all can start movements,” particularly as would-be changemakers may feel daunted by political and social divisions. “Whatever you do, action, passion, and creativity count. Now more than ever,” she writes.

A clear vision and an engaging story to support it can give fuel to causes and social change movements. But rather than sticking to general frameworks, Purposeful also offers concrete tips for getting people mobilized. Drawing on a specific lesson she learned at Change.org, Dulski describes an approach called the “ladder of engagement,” in which changemakers invite individual supporters to begin with a small commitment and build to larger ones, magnifying the overall impact. “You start by asking for a lightweight action — a signature, a ‘like’ on a Facebook page, watching a short video — and then move people up the ladder to higher engagement actions, like sharing, donating, or volunteering,” she writes.

Mobilizing the masses is important. But making change happen often demands reaching individual decision-makers at the tops of organizations. Like the stages of grief, Dulski outlines “a series of predictable stages decision-makers tend to go through as they react to campaigns that are directed at them. I call them the Five Stages of Engagement: denial, listening, acceptance, embracing, and empowering.”

An awareness of these stages can help a movement starter frame the benefits of change in concrete business terms, writes Dulski. For example, when SeaWorld was confronted with an outcry over the documentary film Blackfish, which exposed the inhumane treatment of orcas in captivity, the company initially denied the allegations. That denial cost them huge amounts of business from a flood of bad PR until they finally moved to acceptance and took action to stop orca breeding and orca shows. Their favorability score immediately rose 11 to 27 points, and customers returned to the parks. “If they had been able to move from denial faster, SeaWorld could have spared itself the huge hit to its reputation and saved tens of millions of dollars,” Dulski writes.

Change, whether large or small, requires taking a scary first step. Purposefulchallenges each of us — regardless of current circumstance or station — to transcend our fears, to live a life of purpose, a life of service, and a life driven by hope. “Whereas managers accept the world as it is, movement starters burn with the passion to make it more just, equitable, and engaging. We all need to make a choice,” Dulski writes. “Are we managers or are we movement starters?”