More than 100 new students in the Cornell-Tsinghua Finance MBA program and program staff arrived for an afternoon of fierce dragon boat Races at Cass Park in Ithaca in early October. This was the first year that the Cornell-Tsinghua Finance MBA program has participated in this adventurous event as part of their program orientation and residential session.

The Cornell-Tsinghua students arrived for orientation at the start of their program in late September—this is when  the excitement began. In preparation for the dragon boat race event, students were put into six teams of about 16-18 people and created a team name, slogan, and chant, all under 15 minutes. One team came up with quite a memorable slogan: “Beast from the East. All the other teams roared with laughter because some of the team members actually chanted the opposite: “East from the Beast!”

When race day finally came, students arrived at Cass Park at 1 p.m. sharp. Teams gathered together and reported to their tents. The Ithaca Dragon Boat Club coaches called teams one through three to gear up and get in line for the safety and paddling instructions.

The first set of races were about to begin. The first three teams: Pe, Chang Jiang, and the Beast from the East climbed into their dragon boats and started paddling their way out on Cayuga Lake where the races would begin. When the races began, everybody could hear each drummer pounding on the large drums trying to keep all their teammates in sync. Each team chanted their own slogans, one louder than the other. After the teams saw their first set of scores, the second set of races were even more intense because all the teams were fired up to claim first place and take home those shiny gold medals.

Finally, when all the races were finished and the judges were calculating the score, students exchanged opinions about how they did and took photos of the amazing scenery. Ya-Ru Chen, academic dean for China initiatives at Cornell SC Johnson College of Business, announced the winners. The fourth, fifth, and sixth place winners were called up one by one to receive their certificates. Team Pe received the Three Stooges Award, Team 54 Youth received the Rock the Boat Award, and Team Sunk Cost Titanic received the Energizer Dragon Certificate.

Team Chang Jiang Hao won the first prize gold medals with a record average time of 2:33:21! Beast from the East won the second prize silver medals with an amazing time of 2:34:44. And Team Dragon King won the third place bronze medals with a solid time of 2:45:32.

The clock struck 4 p.m. and the hungry group finally got back on the bus and headed to Chen’s house for a BBQ dinner catered by the famous Dinosaur BBQ chain known throughout Manhattan and upstate New York. Chen’s remarks warmly welcomed the Cornell-Tsinghua Finance MBA students and staff to her home. In true Big Red spirit, all the tables were covered with red table cloths and beautiful yellow roses. Eric Yeung, professor of accounting, and Luo Zuo, associate professor of accounting, joined the event, had dinner, and spent time with the students—their arrival generated another round of excitement and joy among the group.

Once the students finished eating they headed into the house and started playing different games, singing karaoke, and socializing together. This was a welcomed, relaxing time—especially after finishing two important exams as part of their residential session. Students talked about how the dragon boat races promoted team-work, collaboration, leadership, and really allowed them to bond together. It was truly the perfect ending to such a wonderful and exciting day for the students.  It’s safe to say the Class of 2021 has started a new tradition of dragon boat racing in the Cornell-Tsinghua Finance MBA.

“After two days of exams, the dragon boat race and the Dinosaur BBQ became the highlights of the day! Thank you for all the careful arrangements. Every day at Cornell is memorable.” 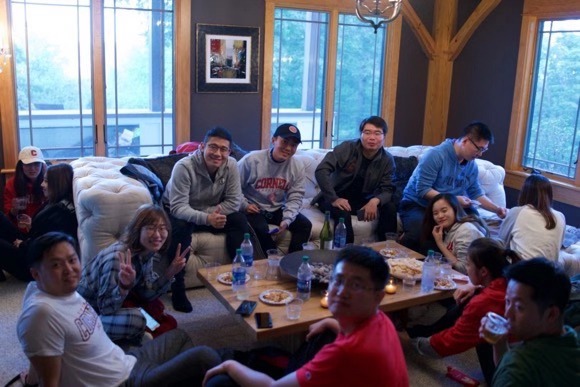 “The dragon boat event was a success and it led to a wonderful group experience and understanding of team-work culture and the will power to win. We are so proud of ourselves and felt like a team winning the game. In this great warm welcome party, talking and laughing with all the professors and classmates in Ya-Ru’s lovely house just make us feel like a real big family.”

“After finishing two exams, we immediately went into the dragon boat races and we fought hard to work together and we achieved victory through our collaboration. The party at Professor Ya-Ru Chen’s house was so much fun and this residential session overseas allowed us to all laugh together and make many wonderful experiences.”

“We were all a little nervous at first, but through our team work and group collaboration we were able to come together and enjoy the activity and sunshine. Ya-Ru’s BBQ dinner was awesome! The chicken wings, ribs, and coleslaw were the best BBQ food I have ever tasted. It was so picturesque and beautiful in Professor Ya-Ru Chen’s courtyard, while enjoying it with our classmates and other professors.”

“I found the dragon boat event an enriching experience. It taught us the essence of why the whole is greater than the sum of its parts. The combination of physical and psychological demands while racing forced us to be more cooperative and in sync as a group, all qualities necessary to be effective future leaders. The dinner gathering at Ya-Ru’s house was unforgettable and much needed. We need many opportunities to bond and let our guards down in order to really know each other beyond the surface level, whether it was through showcasing our wit or vulnerabilities. The intimate setting of last night gave us this opportunity.”

“The dragon boat competition really gave us an exciting team collaboration experience, everyone contributed and made great efforts to the team, which is far more interesting and memorable than I thought. The gathering at Ya-Ru’s house was moving and cheerful. Everyone enjoyed different kinds of games and it helped us shake off a lot of pressures.”

“It was a fantastic experience. The dragon boats let me know the power of the team, and the dinner was delicious and a great opportunity to relax.”