Learning to manage, with feeling

Kristina Workman is doing her part to resurrect the vanishing art of letter-writing. Her students in Managing Professional Relationships are asked to write a letter of gratitude to someone in their life—a parent, friend, or significant other—and then read that letter to them, either in person or via video chat. “Sometimes it makes a big difference in their relationship with whoever it is,” said Workman, an assistant professor of management and organizational behavior in the School of Hotel Administration.

“A lot of classes don’t have an emotional component to them, so it’s easy to disregard emotions or feelings that get in the way of professional success,” said Diego Gonzalez Castellanos ’20. “It was a surprise coming into class and learning how you can be grateful to those who have helped you succeed and how it can help you not only become a better person but also identify the people whom you can rely on.”

Going into Managing Professional Relationships—which he calls “my favorite class at Cornell”—Bryson Navallo ’20 thought the course would give him insights into the business world that would help him with an eventual career in casino relations in his native Las Vegas. “What I did not realize was that her lessons reach beyond the professional world and relate to every aspect of my life,” he said.

Ryan Kokell ’20 considers Workman “a walking lesson” on the subject of organizational behavior. “As a mother and full-time, tenure-track professor at a research-driven university, Dr. Workman has firsthand experience with managing and fostering sometimes difficult professional relationships,” he said. “Her insights into these real-world topics make the class worthwhile.”

A passion for compassion

“Growing up with two social-worker parents, you have an appreciation for psychology and sociology and the value of trying to do something that will make a positive difference with people,” said Workman, a native of Sharon, Massachusetts whose parents worked in child protective services.

That got Workman to thinking: “Why would businesses treat people this way? Why would they allow their employees to treat other employees this way? Nobody’s winning, right?” Between demotivated workers and the costs associated with high employee churn, “this just doesn’t make any sense,” she concluded.

With a renewed sense of purpose, Workman enrolled at the University of Central Florida to study for a PhD in management with a focus on justice, fairness, and ethics. After completing two years of course work, she followed her mentor, David Mayer, to the University of Michigan, which houses the Center for Positive Organizations inside the Ross School of Business. There she met Jane Dutton, a professor of business administration and psychology whose research interests included compassion and organizations.

“I would never have thought that compassion was a research topic—I didn’t know,” Workman recalled. Dutton had been friends with Peter Frost, a professor in the Organizational Behavior and Human Resources Division at the University of British Columbia and the author of Toxic Emotions at Work (2003). After Frost died of cancer in 2004, “Jane paused her work in that area—it was hard,” Workman said.

The doctoral student’s arrival at Michigan in 2009 brought Dutton back to the subject. The pair did interviews with photographers for the charitable organization Now I Lay Me Down to Sleep—which has, since its founding in 2005, provided free bereavement photography to more than 40,000 families dealing with infant loss—and together they have published a pair of papers: “Compassion as a Generative Force,” in 2011, and “Compassion at Work,” in 2014. “Jane refers to me as the voice of the sufferer,” she said brightly.

For her dissertation, Workman looked at sharing and responding to good and bad news. “From the beginning, it bothered me that compassion seemed very reactive instead of proactive, and it was just about the negative,” she said. “It’s fundamentally about suffering, as I saw, but I also had this hunch that we can be proactive, and also that the way we respond to good stuff can be a way to prevent suffering in the future.” What she feels brings the research together is the idea of affirmative interpersonal dynamics. “This is my own phrase—it’s not a thing yet,” she explained.

Workman’s current research examines how workers treat each other in ways that foster acknowledgment, respect, and support. “A lot of it is the small stuff: being present for someone, listening—and what kind of difference that makes for us, for our relationships, and for our overall experience at work.”

When she reentered the job market, Workman wanted to find an academic home where her research would be relevant and valued. “SHA seemed like a really great fit, because people are the core of hospitality,” she said. Building on the idea of affirmative interpersonal dynamics, she added, “Looking at how you can treat people with dignity and respect has got to be the foundation of a hospitality interaction. You can’t make people feel welcome if you’re not being respectful, if you’re not acknowledging them. I see anything relational as being very much foundational to hospitality.”

When Workman visited Cornell for her job talk in 2014, “People were warm and spent a lot of time with me,” she recalled. “Someone had some extra time, so they gave me a tour of campus. It seemed like hospitality wasn’t just something that they espoused, but very much something that they embodied.”

In bringing her lessons to life, she said, “I like to focus on examples that are more positive to give them some kind of inspiration.” On the topic of diversity, she shared the example of a father and son who opened a car wash in Lakeland, Florida that’s primarily staffed with autistic workers. “They found that the qualities that they have, this attention to detail, are great for jobs like working at a car wash and detailing cars.” She then noted, “Strides for neurodiversity are also being made in white-collar jobs, with companies like Microsoft rethinking the interview and selection process for autistic people.”

Workman introduced Managing Professional Relationships to the SHA curriculum, so the course naturally reflects her passions and values. “We have a week on compassion—day one is about having compassion for others, and day two is about having self-compassion. That whole week seems to be a bit of a turning point with every group. It starts to be more personal for them—they’re hitting close to home, they’re relating to their own personal experiences, they’re talking about this with other people. I think they really start to come together in that class.”

A semester-long project is a “reflected best self” exercise—an idea that originated at Michigan. Students are asked to write three stories about who they are at their best and then write a summary, or portrait, of their best selves. Then they collect 15 to 20 stories about themselves from people representing different domains of their lives—friends, family, classmates, coworkers. After looking for common themes in those stories, they write a second version of their best self-portrait. Finally, the students compare the two portraits, “think about the contextual factors that allow them to be their best, and make a plan for how to be their best,” Workman said.

“The first part of the task already put me out of my comfort zone, because I strongly dislike the idea of asking others for help, let alone asking them to write positive things about me,” said course alumna Cassandra Rampino ’18, an analyst at FMCG Direct in New York City. She was surprised by her story responses: “I received some stories that highlighted moments of compassion and kindness; however, I received an equal number of stories that showed my strength in times of adversity and my ability to make challenging decisions.”

The assignment culminates with each student presenting his or her reflected best self in front of the entire class. “It brought so much joy and positive emotion to me and those who were involved,” said Ilfat Fazylbayev, MILR ’19, who has since returned to human-resources senior management at Nazarbayev University in Kazakhstan.

“Taking the relationships class with Professor Workman allowed me to reframe my opinion of my strengths,” Rampino reflected. “She taught me not to sell myself short. As a woman working in a predominantly male office, it is important that I see myself as a leader and take pride in my education and happy demeanor.”

“It’s interesting for them to see themselves through somebody else’s eyes,” Workman said. “For some of them it’s a really big moment, and for others it is very affirming.”

Hugs across the aisle

For the first class following the 2016 presidential election, Workman had slated a lesson on relational leadership—the idea that leadership effectiveness relies on the ability of the leader to create positive relationships within an organization. With emotions running high on both sides of the aisle, Workman was wary of bringing politics into the classroom—“You don’t want anyone to offend anybody”—but “we ended up having a fabulous conversation,” she recalled.

“One student said, ‘I feel scared and I feel disappointed, and I should have a little time to feel that way, and other people are excited and they’re happy, and they should have time to feel that way, before we all move forward.’ And I thought that was great.” At the end of class, borrowing from her Catholic upbringing, she encouraged everyone to offer someone a sign of peace before they left the classroom. “You should’ve seen these students start walking across the room, these young men hugging each other,” she said. “It was terrific.” 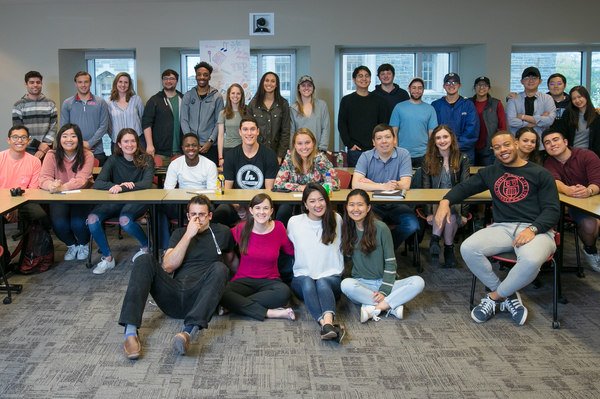